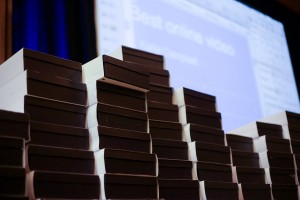 Trophies boxed up, ready to hand out at the NW Excellence in Journalism awards gala (Photo by Joshua Bessex)

We also heard your feedback about last year’s revamped contest, and we’ve made changes we hope will improve your experience. These includeÂ working with a new contest vendor (Better Newspaper Contest),Â combining the Non-daily and Alt Weekly categories, addingÂ a new daily print category andÂ more visual categories to better recognize the work of visual journalists.

This contest is the largest of its kind in the nation and honors journalists across the very diverse SPJ Region 10, which covers Alaska, Washington, Idaho, Montana and Oregon.

All proceeds from this contest support the efforts of Region 10 and its active chapters to protect First Amendment freedoms, foster excellence among journalists, inspire young journalists, encourage diversity in our industry, and promote the free practice of journalism in our communities.

The contest deadline is Feb. 15 at 5 p.m. PST. Winners will be announced later this year on the Region 10 blog.

Find out more about the contest on the Region 10 blog, or go directly to the contest.