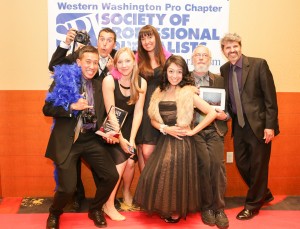 Tickets for the 2015 SPJ Awards Gala are now on sale! This year’s banquet honoring the best of our region’s journalism kicks off at 5:30 p.m. Saturday, June 13, at the Renaissance Seattle Hotel.

Don’t miss it — this is a blast every year and 2015 will be no different. We’ll announce the winners of the 2014 SPJ Northwest Excellence in Journalism contest at the event, and will post the winners online that night.

A few reasons why you should buy your tickets TODAY (other than the fact that the early bird price expires soon…):

Get your tickets today, and we’ll see you June 13!