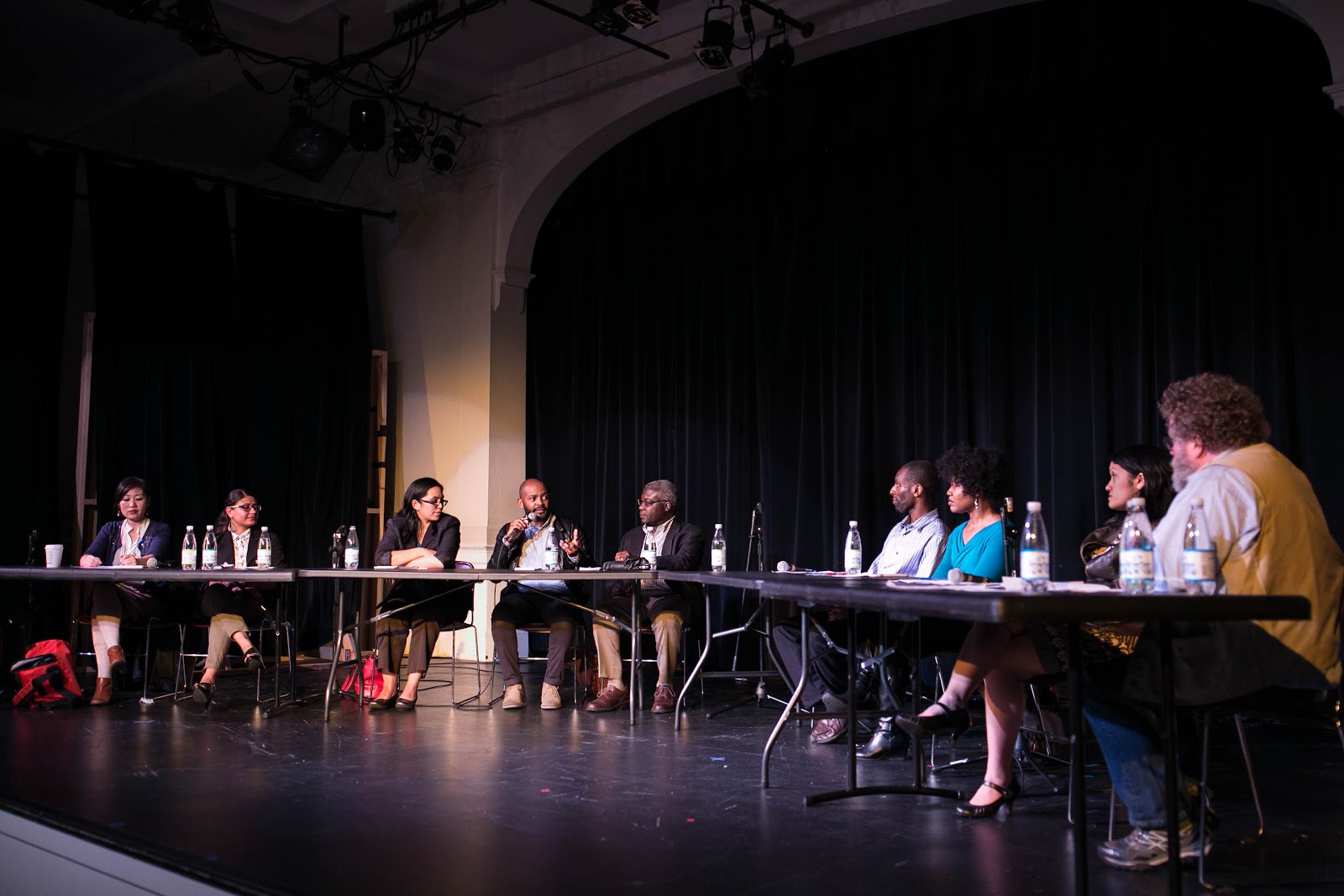 Panelists discussed the root of skewed demographics in newsrooms.

After years of feeling heard but not listened to, some of Seattleâ€™s top journalists have ideas on how to ignite systemic change in the industryâ€™s diversity problem.

A diverse sampling of Seattle journalists including reporters and editors from the Seattle Times, the Seattle Globalist, Pacific NW Magazine and YES! Magazine gathered recently to talk about diversity, or lack thereof, in newsrooms.

The discussion centered around the heart of misrepresentation in the media: why itâ€™s persisted for so long, and how we can change it.

While the total amount of journalists employed nationally at daily newspapers has decreased dramatically over the last eight years, the percentage of people of color employed has remained essentially the same, hovering between 12 and 14 percent according to the ASNE 2015 Census.

This small fraction of journalists of color in the newsroom is not enough to represent a vast range of narratives and experiences. To combat this, marginalized folks have begun to use the internet at a tool to create their own representation. When Seattle musician and artist Hollis Wong-Wear saw an article in the Seattle Times that reduced her to a â€œsidekickâ€ in a headline, she took to the web and used her situation to demonstrate how journalism has failed, and continues to fail, communities of color.

â€œThe problem with journalism in general being so homogenous racially as well as gender-wise is that it doesnâ€™t allow for more stories, more narrative and more sensitivity to communities of color,â€ said moderator Marcus Green, founder of the South Seattle Emerald.

In an age where every social injustice has a hashtag, how can #JournalismSoWhite persist? 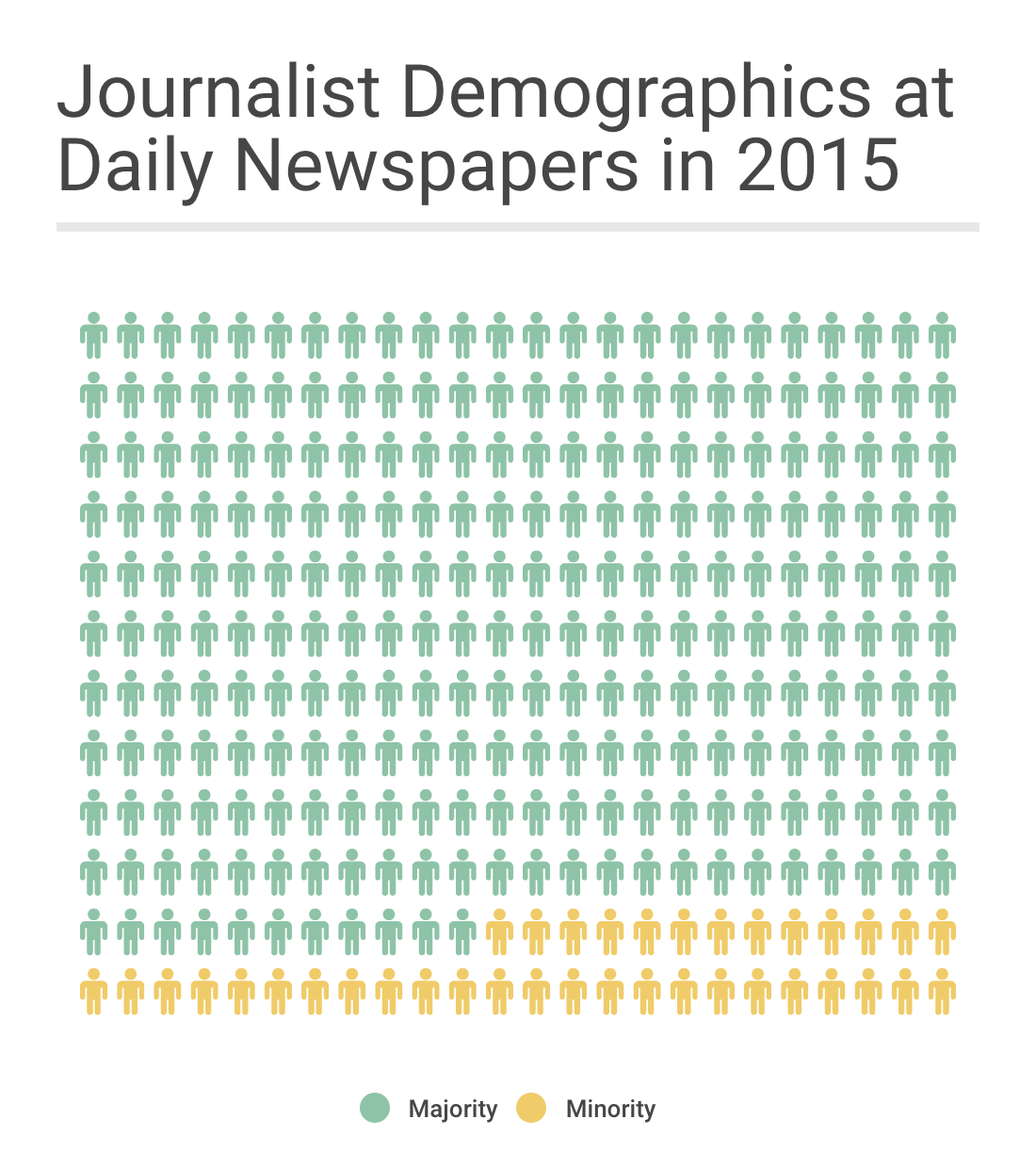 The panelists unanimously agreed that a portion of the mediaâ€™s misrepresentation can be attributed to hiring methods.

By nature, people like to hire people who are similar to them, said Large. With only 12 percent of newsrooms saying at least one of their top three editors is a person of color, itâ€™s not surprising this practice isnâ€™t conducive to change.

Students who come out of journalism school are increasingly diverse, said Christina Twu, an editor at online global-local publication Seattle Globalist, but the drop-off happens after graduation. Although journalists of color are graduating, the diversity isnâ€™t translating into the newsroom.

In an increasingly competitive job market where newsroom experience is essential for an entry-level job, internships are a necessity for student-journalists hoping to enter the workforce. Since most internships are unpaid or provide nominal compensation, they simply arenâ€™t an option for some students, many of whom already work to support their education. When students canâ€™t take paid internships in order to keep up with the competition, they opt for jobs with lower demands and higher pay, giving young journalists from privileged families priority in the job market.

However, Buhain said, the options are out there. Agencies such as the Asian American Journalists Association exist entirely to assist journalists of color in entering the workforce.

â€œJournalism is not as white as newsrooms are,â€ said Tyrone Beason, a reporter for Pacific NW Magazine. â€œWe need to reinvest in cultivating talent. In a time of budget cuts, itâ€™s slipped down the list of priorities.â€

2. White narratives are the norm. 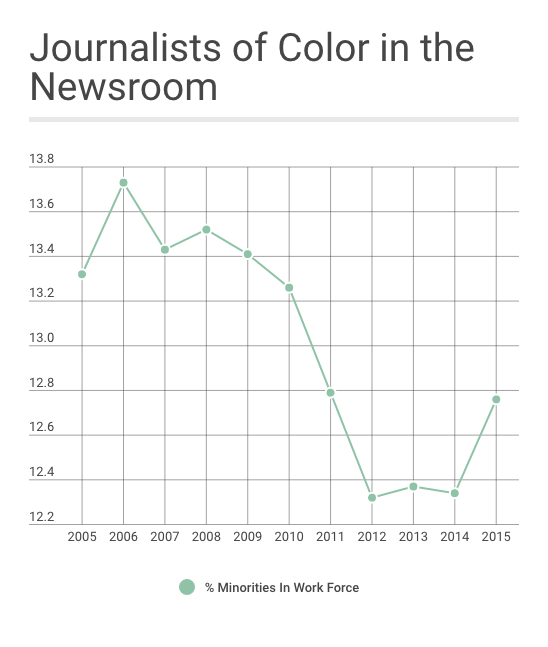 The stories weâ€™re used to seeing in media are tailored to white audiences, said Sonya Green, the News and Public Affairs director at KBCS 91.3 FM.

To demonstrate this, Buhain used the example of immigration stories. Often, narratives are presented as â€œletâ€™s explain these policies to the white people,â€ rather than discuss who the policies affect, and how they affect them.

The responsibility for redirecting this pattern lies partially with the audience, said Yessinia Funes, assistant editor at YES! Magazine. In order to see real change in the state of the media, white people will have to get comfortable with reading stories centered around other groups of people.

This begs the question: when the majority of journalists are white, how can they accurately report on communities they donâ€™t belong to?

Beason said the secret lies in â€œminimum filtration, maximum curiosity.â€ Ultimately, this is a core value of journalism: to provide a fresh perspective on experiences you are unfamiliar with.

When reporting on unfamiliar communities, itâ€™s important to remember that not everyone is the poster-child of their race, Beason said.

Bias is the four-letter word of journalism. However, panelists argued that the concept of an absolute truth contributes to a narrow portrayal of real-life experiences.

â€œReporting is not an objective experience,â€ Beason said. â€œWhat I try to do at the Seattle Times is write stories that reflect a little bit of who I am as Iâ€™m reflecting the community back at itself.â€

Thereâ€™s a gap between objectivity and the pursuit of truth. Just because youâ€™re being objective doesnâ€™t mean youâ€™re actually telling the truth, said Funes. Itâ€™s completely possible to make no claims of your own, but still present a bias through a string of carefully chosen â€œhe said, she saidâ€ attributions.

When youâ€™re working to represent a diverse range of life experiences, each person will have their own individual truth in context to their story. True journalistic objectivity is culminating and representing each of them as wholly and accurately as possible, said Beason.

Audiences know when theyâ€™re being misrepresented, and if one media outlet isnâ€™t relevant to them, theyâ€™ll get their news elsewhere.

â€œIn the end, we all have a truth,â€ said Beason. â€œAnd our job is to synthesize in a way that respects all those truths.â€