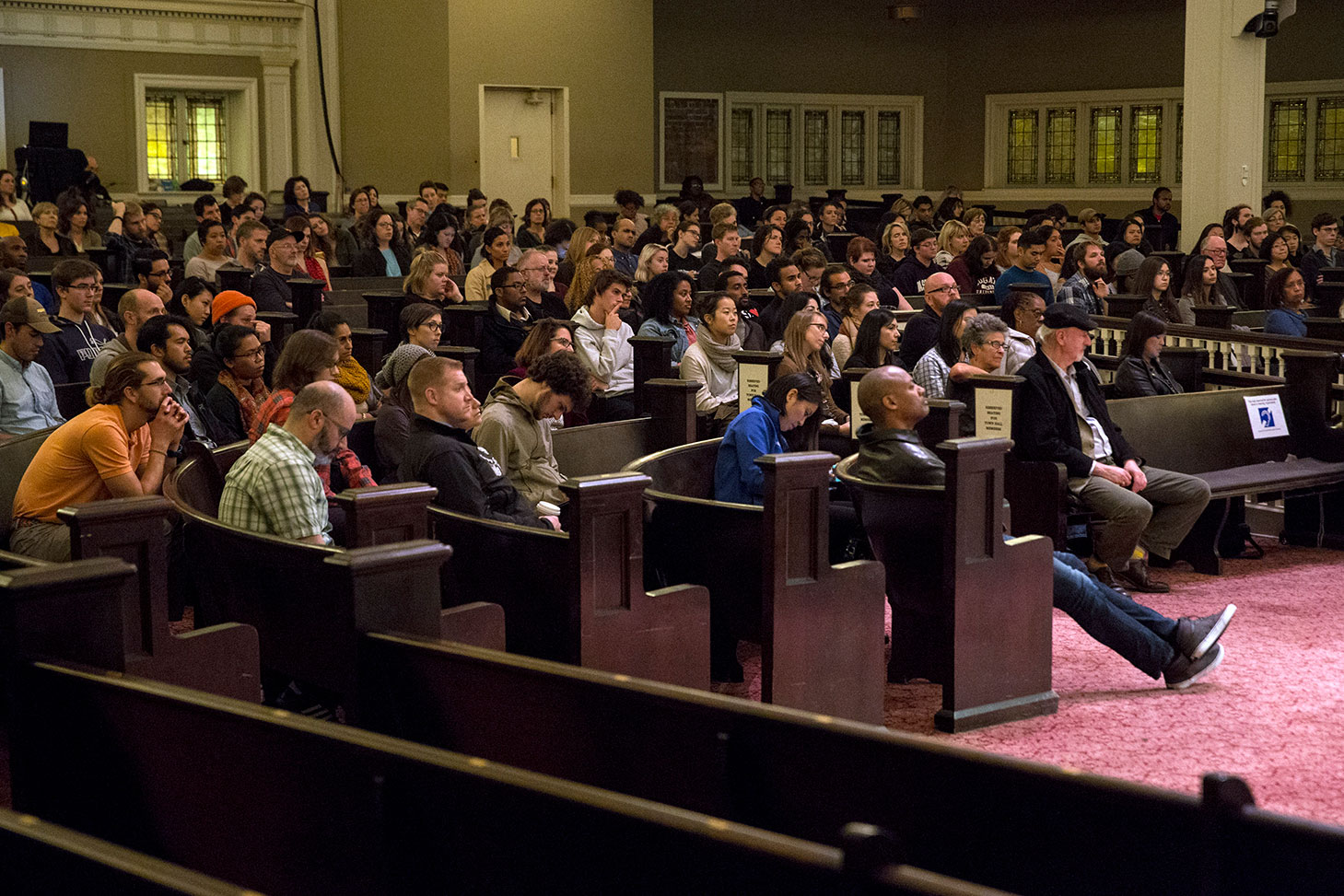 27 Oct #JournalismSoWhite, part 2: No quick fixes and â€˜diversityâ€™ doesnâ€™t mean what you think 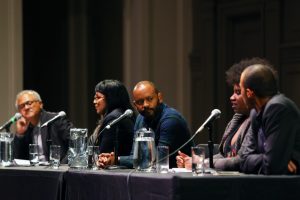 Ninety minutes isnâ€™t a lot of time to get through some of the most enduring challenges in journalism, but panelists and the audience tried to tackle some of them Tuesday night.

In his introduction to the second #JournalismSoWhite event of the year, this time at Town Hall Seattle, Marcus Green said, â€œIâ€™ve begun to have a problem with that word diversity, especially its application in our industry. Itâ€™s come to denote a level of societal charity. That if you just sprinkle a few black and brown, or native, or Hispanic or Asian and LGBTQ faces, that will be enough to engender the trust of communities of color in a media that only 6 percent of Americans as whole have a strong confidence in. The gospel of diversity says you change nothing else at your media outlet, other than simply making an allowance for one person, or, God willing, two, who come from the ranks of the marginalized, then somehow, lo and behold, our mediaâ€™s inclusion problem will cease to be.â€

Green, editor-in-chief of the South Seattle Emerald and secretary of the SPJ Western Washington Pro Chapter, added: â€œThis quick fix will never address our mediaâ€™s stubborn dilemma â€” that is, the problem of the lived experienced of far too many of in our society that still struggles to be seen, struggles to be told authentically, because those narratives are not perceived as normal, nor rational, nor relevant in newsrooms lacking in cultural sensitivity, newsrooms whose dominant default in their judgments and viewpoints boil downÂ to white-male-centric.â€

It should be that way, but the reality that panelists provided and the audience reinforced shows thereâ€™s still a long way to go. 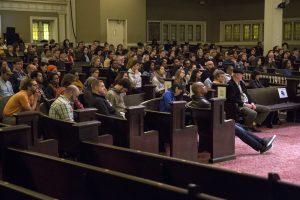 Monica Guzman, 2016 Nieman Fellow, spoke of the â€œcultural aspirationâ€ of â€œrepresenting communities betterâ€ and said she wished â€œdiversityâ€ would fold into â€œa better definition of accuracy.â€ But for news organizations, itâ€™s usually cheaper to do what theyâ€™ve always done and harder to justify breaking outside of what they usually do.

Venice Buhain, president of AAJA Seattle chapter, cautioned against the idea of â€œdiversityâ€ as something abnormal and separate. Tyrone Beason, Pacific Northwest Magazine/Seattle Times writer, said, â€œDiversity means everything and nothing at the same time. I prefer the word experience.â€ Reagan Jackson, writer and editor for the South Seattle Emerald and The Seattle Globalist, called it â€œoverused.â€ Andrew Simon, director of the fellowship program and creative projects at Grist, thought diversity should reflect the communities that news organization speak to, while moderator Enrique Cerna of KCTS saw it in terms of numbers, an â€œHR termâ€ that should applyÂ more toÂ equityÂ than employment quotas.

The more things stay the same, the more they change.

In many newsrooms, over the last 20 years, as a journalist of color, Iâ€™ve heard a lot of these frustrations and hopes for the future. Iâ€™ve tried to do what I can. At the Village Voice, I hired young women and people of color into the research department. I belonged to the diversity committee at The Baltimore Sun. I explored sub-cultures at the Seattle P-I. I volunteered for AAJA and then SPJ for 15 years and attended UNITY conventions. Basically, I rabbled, I roused, and I fought a good fight.

But it wasnâ€™t enough then, and itâ€™s not now.

And so, others keep fighting the good fight. 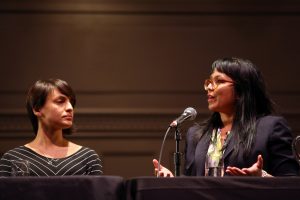 Buhain, an editor with The Seattle Globalist, spoke up for her organizationâ€™s coverage of stories other media outlets didnâ€™t cover, and workshops and training to help people tell their stories, in their own words. Jackson said she believes in creating a structure for everyone in community to have a voice in stories.

With the new Evergrey newsletter, Guzman is trying to make Seattle more accessible to everyone and stressed the importance of earning the trust of the communities youâ€™re covering. Beason, whoâ€™s been at the Times for 22 years, said vigilance was important in order to maintain consistency in representation even in years when the ball dropped. For Simon, thereâ€™s a practical incentive for making sure there are more voice in the mix â€” the opportunity to grow an audience and enrich the storytelling perspective.

During the Q&A part of the evening, which lasted almost an hour, members of the audience expressed frustration with perceived media biases, wondered if diversity clashed with profitability, and asked again why journalism was so white.

Panelists discussed both the changing influences on modern news and some ways in which journalism should maintain some of its foundational principles. Itâ€™s not necessary these days for storytellers and news gatherers to have a journalism degree, and citizen journalists are the new norm, several panelists said. Other thoughts:Â Many voices can find an outlet, and being open, fair and accurate are still standards to uphold.

Black Twitter got a shoutout, as did Hamilton, as powerful influences on todayâ€™s language.

But I think theyÂ missed an opportunity to remind people how important it is to have training as a reporter, to understand how to execute fairness and accuracy not only in writing, but in information gathering and corroboration as well. While itâ€™s true there are more voices than ever before providing information and â€œcommitting acts of journalism,â€ not all of it is of equal quality. 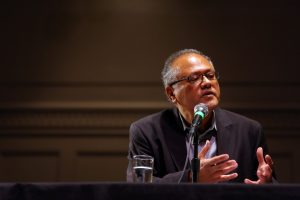 Enrique Cerna of KCTS, moderator of the #JournalismSoWhite panel at Town Hall (Photo by Genna Martin)

More voices in journalism can also help media stay relevant, said Buhain, who does think profitability and diversity are aligned. She believes advertisers want to reach more communities, and diversity in staffing and coverage can help with that.

While some journalists embrace a more traditional aspect of journalistic neutrality, columnists like Jackson embrace their biases and the freedom to broadcast them. She explained that she isnâ€™t aiming for objectivity -she is who she is.

When an audience member asked about bias, Beason mentioned his coverage of a Trump rally in Lynden, in which heÂ included an anecdote from a Muslim woman.

â€œAs reporters, we have to set the table and create space for people to tell their stories,â€ he said, and not just bring our own experiences to the table.

To me, itâ€™s clear thatÂ in-house at outlets like the Times, newsroom leadersÂ need to have more difficult conversations before stories are published, and act as watchdogs against cultural misappropriations. Simon talked about this idea, too, saying,â€ideas of inclusion need to be baked inâ€ for newsrooms to get better.

It was clear from the Q&A that audience members were still confused as to why journalism was, in fact, still so white, given the abundance of voices getting through.

â€œThe country is still so white in terms of who holds power,â€ Beason said. â€œAs the country changes, weâ€™d like papers to be leaders.â€ The watershed moment of eight years with a black president, he said, has not produced more people like him writing about him.

Beason urged anyone black, Latino, LGBT, or of color to â€œkeep writing â€” and find us.â€

â€œWe have to keep reminding people that this is a right we have, a right that everybody has, to be a journalist,â€ Buhain said.

Like I said at the beginning of this post, 90 minutes isnâ€™t enough time. This conversation is anything but finished, as many ideas were introduced and discussed Tuesday night. Even before the event ended, tweets hating onÂ #JournalismSoWhite emerged.

Help us find answers to these lingering questions. Tweet to us @SPJWash with the #JournalismSoWhite hashtag. Post on our Facebook page.Â Letâ€™s keep this conversation going. What solutions can be applied now? How do we move forward? What about economics? The Stranger released a breakdown of its staff a day before the event. How about other local newsrooms?